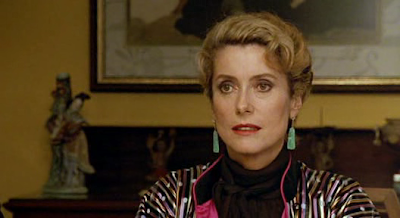 It is the story of Éliane Devries, a French plantation owner, and of her adopted Vietnamese daughter, Camille, with the rising Vietnamese nationalist movement set as a backdrop.

You can find my short review of the film just by clicking HERE.

It’s a very long film with a second part that works better than the first half. When there’s action and tension, the film works quite well; other than that: not so much.

Theoretically, it’s always a delight to see a foreign actress receiving an Oscar nomination for a foreign language film. It gives a more exotic feel to the competition and it’s also an opportunity to acknowledge actresses who have been giving memorable performances for decades. Catherine Deneuve is a legend, partly because of her beauty, partly for dominating the French cinema for years and years. Her performance in Indochine however is not bad, but also not Oscar worthy. 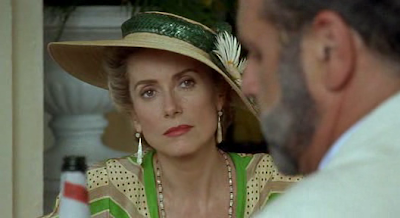 The movie starts with her in full speed. She’s playing the leading character and a very colourful one: she whips her disobedient (almost slaves) employees, gets high on drugs and has a sexual fling with a gorgeous younger man. Are all these acted well? Hmmm. I found her to be rather

stiff and often enough more frigid than the role required. At least if she would’ve gone all the way, but Deneuve undecidedly decides to keep Éliane somewhere in the middle, which generated a less than great result.

There are moments where she’s underplaying a bit too much and we don’t get the feeling that she’s fully dedicated to her character. We are not receiving the emotion we need to understand Éliane besides her whipping imperialistic attitude. The emotion comes a bit late and we get just drops of it: it happens when things don’t go well with her lover. That relationship itself doesn’t feel right on its own and lacks credibility. I mostly accuse Deneuve of not being seductive enough for the film romance to work. Yet although it feels out of place, the sex fling at least increases the intensity of a mostly boring movie. 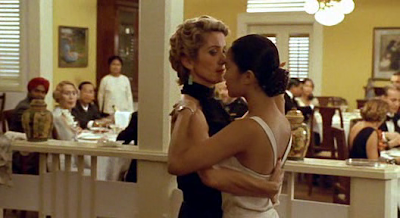 It’s nice to show restraint, but keeping back more than enough is actually worst than overacting. Though subtle at times, Deneuve’s performance really lacks passion. I can feel that it’s not really there. She’s not in it with all her heart and soul. You can see that in line readings and you can

mostly see it in the tango she twice dances with her daughter. Where’s the passion? Where’s the true intensity? These are hard to find in the first half of the film.

Strangely enough, as the film gets better, Deneuve’s Éliane is almost taken out of the picture. For almost an hour, she only gets brief appearances and some voice-overs. The voice work is truly superb (it really starts in the

beginning of the film, but gets more relevant in the 2nd part), she’s a great narrator and it’s a pleasure to listen to her. [do notice that I also count voice-over as screentime]. Yet her biggest sin here is that the film itself gets better when she’s not around. How shameful is that for a leading actress, not being the one who can carry her own film.

Her best scene comes towards the end of the picture. It’s an excellent actressing moment with Éliane seeing her daughter after she’d been in prison for many years. Deneuve displays real emotion and great acting skills; she truly lets go and it’s her most humane scene in the film. You can feel the honesty of her tears and how much she’s been really missing her adopted daughter. Too bad there weren’t more moments like this in her performance. 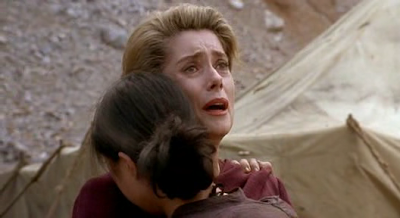 Is it Deneuve fault or the screenplay’s? Hard to tell, but truth is she had the power to shape the character the way she wanted it. I think she misjudged the character in the beginning and didn’t set up the right tone for the performance. She started it shaky, rigid, without any passion. Her big scene towards the end proved her talent and that she had potential for greatness, but it was too late. I don’t think it’s a bad performance, but it has flaws and a rather weak feel to it. Maybe the nomination was worthy, considering the year was not that strong. I give her

, just by comparison to the other gals.

***EDIT: As stated at the 100th profile celebration (HERE), Catherine's performance has been upgraded to

I think Catherine Deneuve was a revelation in Indochine. There was a solid connection between the audience and Eliane. Compared to her performances when she was younger, I think Deneuve was great in this film. Subtle, but definitely not dull.

Also, I think Deneuve presented Eliane as a "rigid" or "cold" character because she is an authoritative woman, I mean, running a rubber plantation is no piece of cake, you can't show to your workers your weak spots, she's their leader.

Alex in Movieland
I need something catchy here :)